During this 3 days holidays (November 23rd-25th), I took a day trip to Nikko city which is located in Toshigi prefecture (日光市、栃木県). Apparently, it is in the northern part of Kanto region. I always thought it is quite far from Tokyo but in fact, it took only about an hour and a half from Tokyo by express train.

Nikko is famous for the mausoleum of Shogun Tokugawa Leyasu or the Toshogu shrine and another shrine called Futarasan which is a mausoleum of the Shogun’s grandson. I’m not sure about the history of these shrines but although they are ancient, they have been preserved very well  and praised for its historical values that these sites were stated as ”the World Heritage’ sites’. Nikko is famous for its beauty, historical sites, amazing natural and breathtaking sites and also onsen, especially the famous Kinugawa onsen. More info about Nikko-click here. 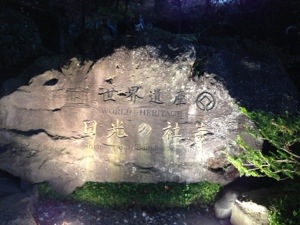 My friend and I decided to visit Nikko since it is autumn and Nikko is supposedly one of the most beautiful places for the season in Japan. The leaves should turn red and yellow meaning the whole mountains would be scenic. We were right about that, it was spectacular, except that traveling there during holidays was not such a good idea.

We started off our trip from Shinjuku station. We had breakfast there and took Spacia express train from Shinjuku station’s new zone, ‘shin-minami’ entrance. Apparently, this train connects Nikko to Tokyo-all the way to TokyoSky Tree. You can get on from Shinjuku, Asakusa, and other stations. We arrived at Tobu-Nikko station around noon. 🙂 It was such a pleasant ride. 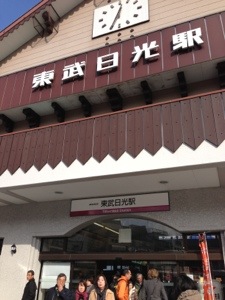 Then, ramen for lunch and strawberry milk gelato! Sounds like a strange combination but it was a really good meal. The weather was quite cold so ramen was perfect..gelato-not so much.. 😉 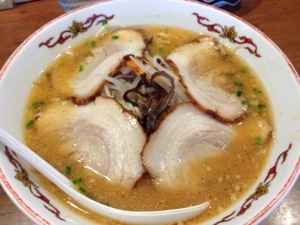 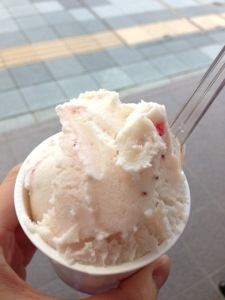 After lunch, we took a bus to Toshogu shrine which is the most famous place in Nikko. The bus was super packed… Something we couldn’t avoid on holidays. The normally takes only 10 minutes, but it took almost half an hour for us.  We got off at a stop called Shinkyo, which has a beautiful bridge by the river at the entrance of the world heritage sites.  It is a gateway to the shrines and temples of Nikko. The view there was scenic with all the leaves turning red and yellow! 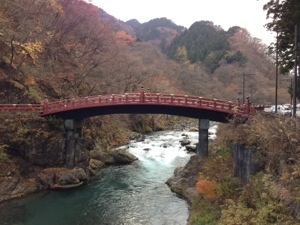 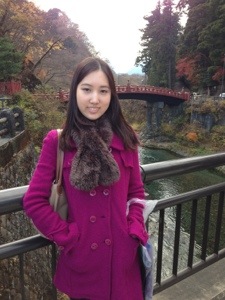 The world heritage sites in Nikko consists of many shrines all linked together. The most famous ones are Toshogu shrine, Futarasan shrine, and Yutenji shrine. We went straight to the famous Toshogu shrine. It was crowded with people but I can see why it is UNESCO’s world heritage site and so renowned. The architecture is wonderful with lots of decorative ancient art works. The shrine is very old. It looks sacred with its natural settings. I enjoyed this shrine very much and had to search more about its history when I came home that day.

UNESCO’s description of the shrines and temples of Nikko

At the entrance of Toshogu shrine, there is a pagoda in which I also saw a campaign comparing this pagoda with Tokyo Sky Tree. 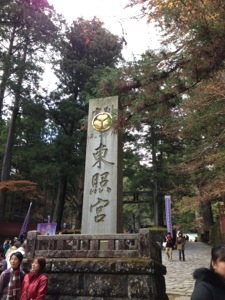 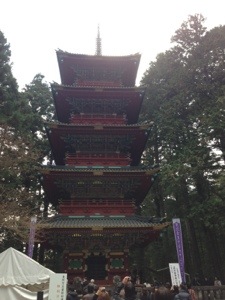 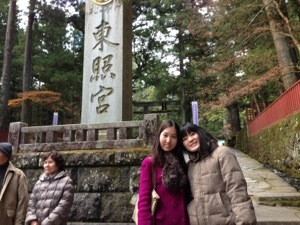 We took a few photos and proceeded to the trails in the shrine. 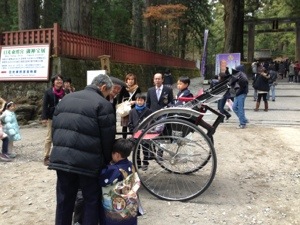 A boy crying..not wanting to take a ride on that vehicle. 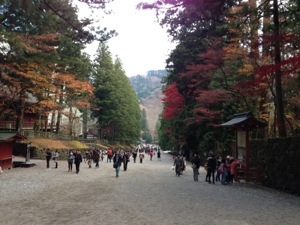 There are so many masterpieces in the shrine. Each piece has its own meaning and history. One of the most famous ones is the sleeping cat which is an artwork on top of the ceiling at the middle gate. (picture on the right)

We also found a tree that is said to be sacred. All of the things inside this temple are preserved very well. Not exactly in a pristine condition since the shrine is very old but with the all the artworks condition and long history, they are so worthy to see. I need to read more about its history. The shrine has its own charm, very interesting! 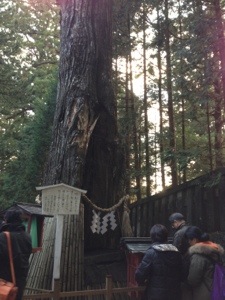 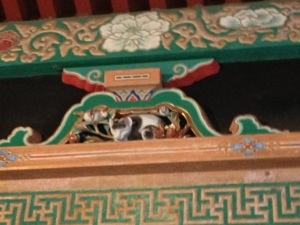 Look at the crowd of people. We had to line up all the way on the trails inside the shrine. It was like lining up for a ride at Disney Land. Still, it is a beautiful place and I loved it! 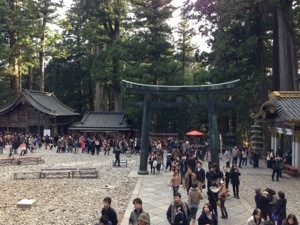 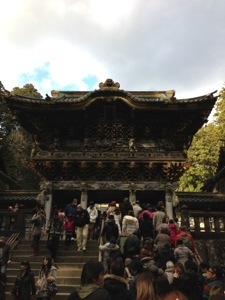 Beware that the shrines close early, probably the same as shrines in Kyoto. I remember we came out of the Toshogu shrine around 4 pm but all other shrines were closing so we could only see Futarasan shrine a bit.

The picture on the right–> This circle is said to be a circle of good luck. This LUCK has two meanings of luck as being lucky with things and with people as well. In Japanese, they call it “UN” and “EN”, meaning luck and luck related to relationships. We had to walk inside the cirlce as the instructions say. 1. Go in and out from the right. 2. Go in and out from the left. 3. Lastly, go in and out from the middle of the circle. Not sure if I did it right but I hope I get lucky! 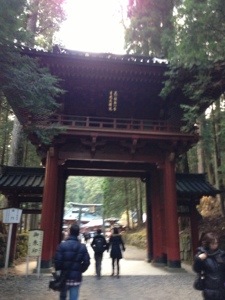 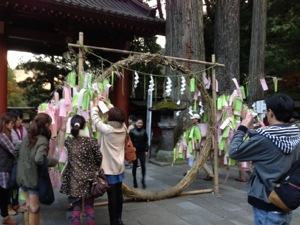 After visitng the shrines, we decided to walk back to the station since the bus would probably be packed. We ate some Karaage on the way and went into many souvenirs shops. I got the blue cup, my friend got the red! Apparently, another important artwork in Nikko shrine is the three monkeys- the monkeys that cannot see, talk, or speak. We must have missed it in the shrine. Will need to be back for sure during…weekday probably. 😉

I had a great time! Really recommend Nikko for anyone visiting Japan!