Impressions on Dec 5th, 2012 – Long live the King of Thailand

This post, I want to take you all out of Japan and to my home country a bit – Thailand. 🙂

I’ve been in Japan for a long time since I became a college student. Now, I am working so I don’t get to go home as much as before. Lucky for me that I am working on a project of launching a new company in Thailand so I get to visit Bangkok a couple of times already. At the start of December, I got to visit home again and this time, I went there during the King’s birthday week. December 5th in Thailand is H.M. the King’s birthday and a national Father’s day as well. The trip home this time was special. The event on December 5th was so impressive I don’t think I’ll ever forget.

8:00  My parents, my aunt, my cousin, and I got out of our house by car. According to the announced schedule, the King will leave the hospital around 9:40 and come out at the balcony palace at 10 AM. So, we tried to be early. But clearly we were not early at all compared to hundred thousands of people who had waited and camped in front of the palace the day before (See the pic for evidence!). From the car, I could see everybody wearing yellow shirt, which is the color of the King. In Thailand, all our birth days (Sun-Sat) each has color. I could also see so many people heading the same way.

8:30 We parked our car not so far from the palace. Well, about 2 km away from the area. After that, we had to take a taxi to go into the area since it was too far to walk but not many cars could go in.

9:00 We got off and started walking into the road that the King and the royal family will pass by. Everywhere looked yellow that day (literally) ;). We couldn’t decide whether to go into the sea of people to see the live screen of the balcony or to see the King shortly when he passed by car. The area in front of the palace was already full and we couldn’t go in. And the ground in front of the palace is huge!..Imagine how many people were there that day. 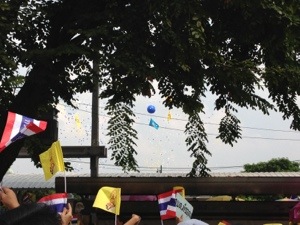 Yellow for the King.
Blue for the Queen.

9:30 We finally decided to see the King when he passes by. So we went to the road where he will come. It was exciting. We kept checking the news and talking to people who were waiting for the King at the hospital to see if he had gone out or not. There were still so many cars! The police took a long time clearing them all out. Once the road was cleared, we were asked to line up nicely and sit down. Sun glasses off. We all had two little flags in our hands-Thai flag and the King’s symbolic yellow flag…then..Everybody started singing the King’s celebration song and waving the flags. I had never felt so impressed of anything like that moment before. 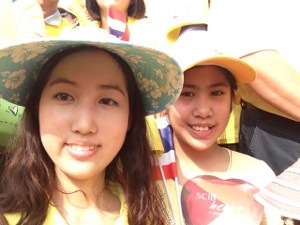 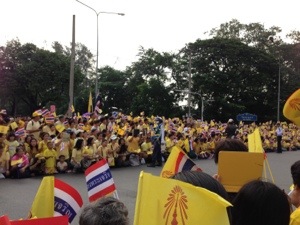 9:50 We heard the cheer of joy and ‘LONG LIVE THE KING’ from the other end of the road. That’s how I knew the King has arrived! The parade started by a few police in motorcycles. Then, some bodyguards’ cars. And then, it was the King and the Corwn Prince in a van! I was on the third row so I could see him so clearly. He looked well in person despite his age and appearance on TV. I was very glad he looked so healthy. Tried to take some pictures but couldn’t because my hands were shaking. All we did was doing the same thing as everybody, shouting ‘LONG LIVE THE KING’!!! 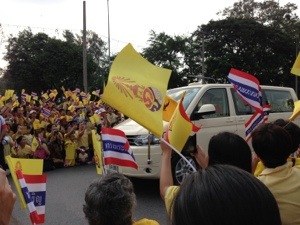 The King was in this car!

10:00 The King came out to the Royal Palace Balcony finally. The Crown Prince, the government and some people started making a speech for his birthday. Then, the King started making his own speech. The screen was showing the King, the crowd, and the people making speeches. He made a great speech and the event ended by all the royal family members came out to the balcony behind him. It was pretty impressive.

11:00 After the event ended, we all started to walk back but since there were about 200,000 people at the same place, we all got stuck. It took a while to get out. The funny thing is, I got to meet so many people I haven’t met in a long time. My school friends, teachers, and others. People came from everywhere. We were tired but felt so fulfilled and happy.

12:00 Home after a long walk back to the place we parked our car. It was a great event! 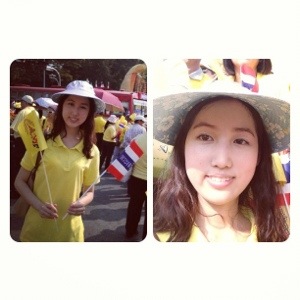 This event was so great to me because there are not many chances like this. Obviously, it was difficult to see the King clearly even if we were there. But the fact that so many people came out mostly to pay respect and show their love for the country, was amazing. Not many times these days that all of us would be united and strong. With all the political turmoil, conflict of interests, social problems and so many things going on, this event was almost like a reminder of the willpower, peace, and unity that are important in each society. As the King said that day, ‘I believe that we will be safe from all the treats with unity, goodwill and organization of people’.

Why Thai people love the King? I believe that Thai people know this well. Thailand has a very long history of Monarchy. This current King of the Chakri dynasty is the 9th King. Thailand changed to democracy in the era of the King number 7 of the Chakri family. Thus, Thai culture and way of life have always  rooted with the royal family. Even before the big change to democratic system, the King, as the leader of the nation would be the one  developing the country and taking care of people’s well-being. This has always been the role of the King, disregarding the time and the state we are in. The King is not related to politics in anyhow and is not obligated to do anything. But after all the things King Bhumipol has done for the nation for more than 6 decades, he gains all the love from us all.

King Bhumipol was born and raised in Switzerland when his brother became the 8th King of Chakri Dynasty. Unfortunately, he was assassinated.  So King Bhumipol had to become the King at the age of 19. He promised to reign the country with righteousness and dedicate to the country as much as he can. He has kept his promise and become the heart of the land, the strength of the nation that is always respected by everyone in the nation.

The King launched more than 4,000 projects dedicated to solving the nation’s problems and developing the country. As for the King’s biography, legacies, and projects, I will not write down in here but I will link some good informative sites for those of you who are interested.

Thai people always respect the royal family and it is rooted deeply in Thai culture. The Kings of Thailand take care of people’s well-bring, support education, and others. In Thailand, all university graduates receive graduation certificate education from the hand of the King or the royal family! My mother was lucky enough to receive it from the King. This means that education is valued. A lot of things in Thailand are related to this sense of values. I also remember that in the past when we had conflicts of 2 sides within the country, the King called in the leader of each group and talk the sense out of them and problem solved! Although he has no political power, people respect him enough to listen and stop hurting each other. The country went  back to being united. I’m not sure how well I am explaining but I hope you get the picture. 🙂

Unfortunately, nothing is this world always go smoothly. With today’s political problems and people dividing into sides, I am not sure how the country will be in the future. All of the values we have related or non-related to royal family can soon be vanished if all everyone think is to find the best way to access the most benefits for themselves. I am hoping that people will find it in their hearts to maintain the goodwill and see what is right.

I don’t know what will happen to my beloved country and what future lies upon us, but I do believe that the good will win. We just need to do what we did on December 5th, 2012 – focus on the good, be united, patient, good to each other, and all of the wonderful things can happen. 🙂

People gathered to pay respect to the King (this is only part of the whole crowd).