As my social media name ‘luvniku’, you can probably guess that I LOVE meat!

I used to live in a small town called Beppu, Oita prefecture down in Kyushu, which is a very famous place for onsens. Since it is a small town, everything is cheap and that includes tabehobai (all-you-can-eat) restaurants which are usually around 980 to 1,500 yen. The most expensive place in Beppu is probably around 2,500 yen. So, I usually went out to yakiniku or shabu shabu places almost every other weekend. I guess that was how I got to love eating meat so much.

Shabu Shabu is probably my most favorite Japanese food. And it’s so easy to make as well. To me, Shabu Shabu, Sukiyaki, and nabe is quite similiar. Shabu shabu and Sukiyaki both have thin slices of meat as main (mostly beef), but any kind of meat, vegetables and others can be put into nabe hot pot. For Sukiyaki, the flavor is much stronger with soy sauce. The soup is usually sweet. For shabu shabu, the soup is light or sometimes have no taste at all. You put the meat in the hot pot and swipe it in there a few times, then bring it out and dip it with sauces and scallions. Personally, I love Goma (sesame seed) sauce and ponzu soy sauce. I sometimes use Thai spicy sukiyaki sauce as well when I make shabu shabu or nabe myself. It’s delicious!

These days, there are so many kinds of soup for shabu shabu. Even collagen soup which tastes better than I expected. On Christmas, my friends and I went to a shabu shabu restaurant for dinner. It was 3,500 yen – pretty expensive but it seemed like the right choice at that time since the weather was so cold that night. We ordered to kinds of soup – honestly, I’m not so sure what they are but they look like this.

The soup on the right side came with something that looks like jelly. It melted away as the water boiled. Then we put in the meat. I think we have to put in the meat one by one for shabu shabu, but that’s never fast enough for us so we put everything. 😀 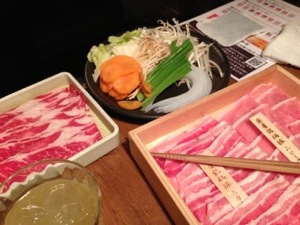 Note that when the soup gets oily and full of fat from meat, you should skim in out. The restaurant would provide a small tool for you to skim the fat out. And you can ask for them to fill in some more water.

Shabu shabu is always a fun to eat with your friends especially if it’s all-you-can-eat. I’m sure it’s one of the most popular Japanese food to both Japanese and foreigners.

This restaurant is Thai shabu shabu restaurant so, of course, I love it. It’s not different from Japanese shabu shabu, only it has Thai spicy sauce and some other kinds of vegetables and meat such as baby corn, shrimp balls, seaweed wrapped pork balls, squip with pork stuffed inside, etc. Isn’t it awesome? 😀

This restaurant also uses a touch-screen device for ordering. You can see the time remaining for your all-you-can-eat menu and you can choose meat or anything from the touch screen and click order! They will come and serve you. Very cool.

The store in Tokyo is in Shinjuku, not so far from Isetan. The menu in Kanto is a bit more expensive than in Kyushu but still very cheap compared to other places in Tokyo.  Try the Thai sauce if you go there. Don’t miss out! 😉

2. Nabezo – Cheap all-you-can-eat with several different kinds of soup to choose. You can go pick up anything you like from the counter to put it in the hot pot. This restaurant has so many locations so it’s quite easy to go. I went to the one in Shibuya .

These are probably the only places I can recommend since I don’t know a lot of shabu shabu restaurant around here. Sorry for the short list. Most of them are really expensive so it’s probably better to make it yourself at home. I also have my own hot pot that I ordered from amazon for 1,000 yen. It can be used both for shabu shabu and yakiniku so if you like meat like me, get yourself one. 🙂

PS Don’t forget to eat some vegetables too!